Who is John Legend?

The first great album of my new year (even though it is 2004) is John Legend's debut CD called Get Lifted. If you thought that Alicia Key's Diary was a great album, you will love this. It's filled with retro sounds: smooth 70's strings and r'n'b vocals reminiscent of Marvin Gaye, Bill Withers, Donny Hathaway, Al Green etc. Like Alicia Keys, he sort of arrives a star. If I base my opinion solely on the music, I predict he will be a well-known star the end of 2005. Can an Oprah appearance be far off?!

John is a protégée of the ubiquitous and somewhat annoying Kanye West, but his "pedigree" goes back to playing on Lauryn Hill's solo debut, another comparable record. He even did the piano on my fave track from that CD, "Everything Is Everything."

It occurs to me that this record is also very similar in spirit to Dionne Farris's Wild Seed Wild Flower from 1994, a record that doesn't wear out, ten years on. How nice to have a new r'n'b star who isn't all about bling bling or six-pack abs. This is really impressive stuff; my current picks are the Lauryn Hillish "Refuge," "Don't Have To Change," "Ordinary People" and the title track. 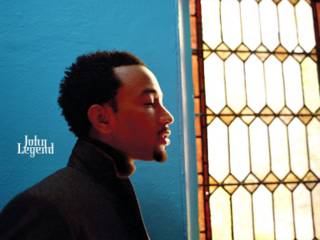