Don't forget the songs that made you smile... 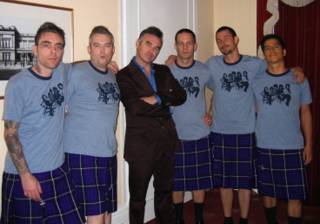 And the songs that made you cry
When you lay in awe
On the bedroom floor
And said : "Oh, oh, smother me Mother..."

Last night was the third and final show of my Magical Music Tour of 3 shows (I failed to mention last week's Trashcan Sinatras show, lovely as it was). I never thought I would see Morrissey live, ever, much less singing Bigmouth Strikes Again (modified so that Joan of Arc's "iPod started to melt").

The show began with a funny bit: synthy music with a woman's voice listing off terrible things like problems in the Sudan and "The Jimmy Swaggert Show". Finally, after milking the tension in the crowd, Morrissey and his band rushed the stage to How Soon Is Now, another surprise.

I have never been to a Morrissey show, unlike the very hyperactive fan I traveled to the show with (someone I did not know, who seemed lost in the Metro. One of those guys who travels to see 4 or 5 shows a tour, on a bartender's salary). The staging was great: at the very back, a big glittery curtain and in front of that (just behind the band), huge letters that spelled out MORRISSEY and lit up with red lights (we got it: Elvis). Each song had a different lighting feel, including some of that dramatic backlighting. Morrissey mostly wore a black shirt and pants and did a lot of funny posing and frequently seemed to be clutching his chest inside his shirt, sort of like Napoleon. There was not a gladiola in sight!

The surprise element of the set list was muted for us because we sat just behind the soundboard and could read which song was next on a computer on the desk (those guys wore shirts that said "Mozzer's Men" by the way!). They did five Smiths songs: How Soon, Bigmouth, Rubber Ring (you know - with the lady at the end: "You are sleeping. You do not want to believe"), Last Night I Dreamt.. and the closing song, mentioned below. The crazed Moz fan told me to only expect two Smiths songs b/c Morrissey doesn't like to do them - guess that's changed. Now he just wants love, which he got in spades.

The band, pictured above on another night, was really strong, particularly Deano the drummer, with his super-huge gong! They were also really loud, so I am now deafer than I was before the show. I don't want to think about it...

Morrissey was chatty, sweet and funny the whole time and he sang perfectly! There were no Moz fan antics until the final song, There Is A Light, (swoon) when the kids began jumping the stage and being dragged away by security. It wasn't setup, but it wasn't discouraged. The last guy was too far from Morrissey when he was tacked by security, so Moz ran across the stage and held out his hand. The guy kissed it and the whole auditorium roared! Then Moz ripped his shirt off, threw it into the audience and made a fast exit! A little thick, a little pale, but we appreciate the effort.

My favorite songs? Probably First Of The Gang To Die, an epic Now My Heart Is Full, Bigmouth (of course) and Rubber Ring. Thanks to my musical compadre for the company at all these shows! What shall I see next?

Set List: How Soon Is Now? / First Of The Gang To Die / November Spawned A Monster / Such A Little Thing Makes Such A Big Difference / Bigmouth Strikes Again / Let Me Kiss You / The World Is Full Of Crashing Bores / Last Night I Dreamt That Somebody Loved Me / Subway Train (into) Everyday Is Like Sunday / How Can Anyone Possibly Know How I Feel? / Now My Heart Is Full / Rubber Ring / Irish Blood, English Heart / I Like You / You Know I Couldn't Last / There Is A Light That Never Goes Out
Posted by xolondon